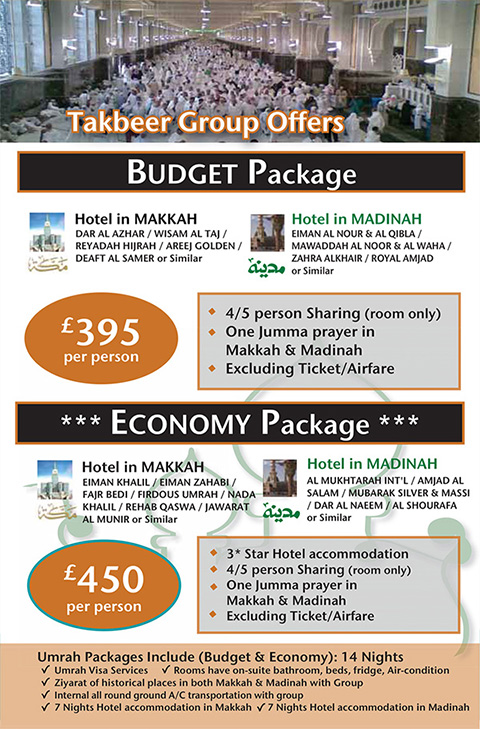 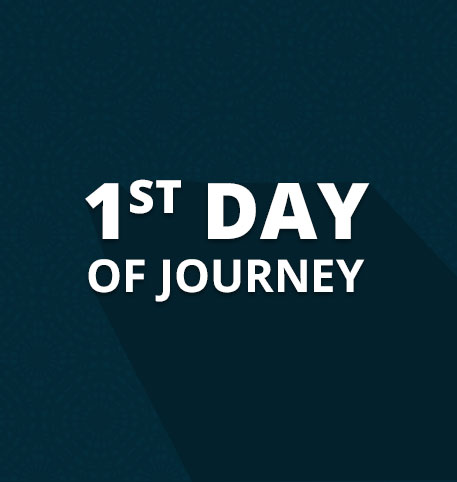 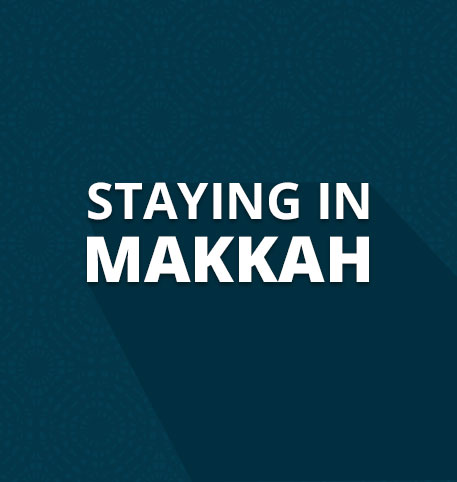 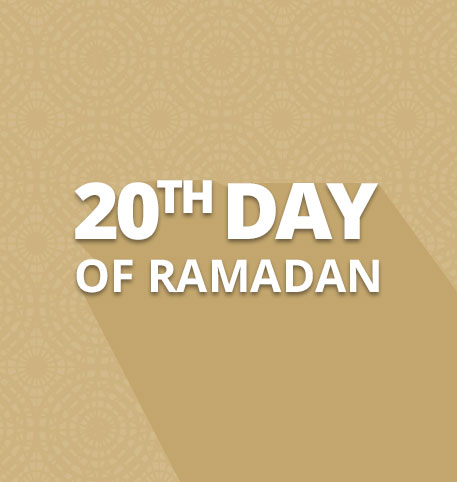 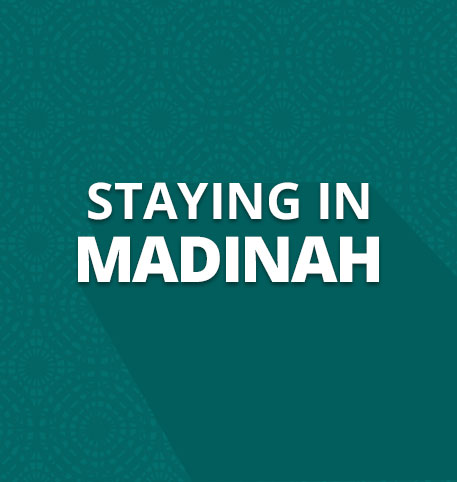 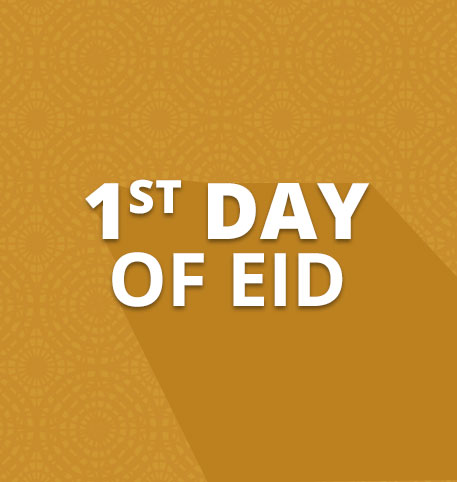 For Booking Call Us On 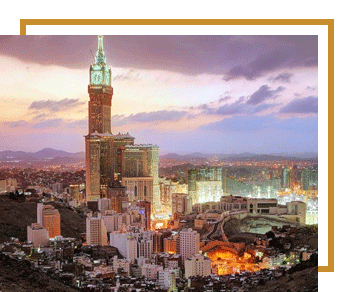 A set of acts of worship prescribed by and dedicated to ALLAH. Prophet Mohammad (صَلَّى اللّٰهُ عَلَيْهِ وَسَلَّم) had performed rituals of Hajj as prescribed by ALLAH in & around Makkah (Mina, Arafat and Muzdalifah) once in his life-time.

It is one of the five pillars of Islam and Hajj is religious obligation on every Muslim who is physically and financially capable once in a lifetime. There are 3 types of Hajj one may perform.

“And announce to mankind the hajj. They will come to you on foot and on every sinewy camel; they will come from every deep and distant (to perform hajj)”. (22:27)

“We have accomplished the shrine (The Holy Kabah) a focal point for the people, and a safe sanctum. You may use Abraham’s shrine as a prayer house. We empower Abraham and Ismail: “You shall purify my house for those who visit, those who live there, and those who nod and prostrate”. (2:125)

Allah (سبحانه وتعالى) said in Quran: “And Hajj to the Kabah is a duty that mankind incur to Allah, those who can afford the expenses” (3:97).

It is on people for the sake of Allah to perform Hajj of his house, anyone who is able to undertake the journey to him. (2:196)

Abu Hurayrah (رضي الله عنه) said: I heard the Prophet (صَلَّى اللّٰهُ عَلَيْهِ وَسَلَّم) say: “Whoever does Hajj for the consideration of Allah and does not have sexual relations, commit sins, or squabble unjustly during the Hajj, will come back clean like the day his mother gave birth to him without sins”. (Muslim 1350, Al-Bukhari 1449) The Prophet(صَلَّى اللّٰهُ عَلَيْهِ وَسَلَّم) said that, “The accepted hajj has no other reward, except Paradise.” [Bukhari] #1773 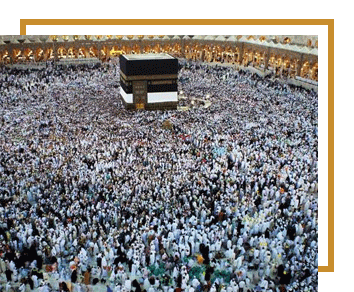 Haaj al-Ifrad: It is where in the pilgrim pronounces his intention to perform only HAJJ at Miqat while changing into Ihram.

Perform Tawaf al Wada just before departing to your destination. The two raka’at of Nafl Sunnah & Sai are not required.

Hajj-al-Qiran: It is where in the pilgrim pronounces his intention to perform both Hajj & Umrah together with the same Ihram.

Perform Tawaf al Wada just before departing to your destination. The two rakah Sunnah & Sai are not required.

Hajj-al-Tamattu: It is where in the pilgrim pronounces his intention to perform only Umrah at Miqat (on arrival) when changing into Ihram. A second niyyah follow on the 8th of Zil-Hajj for a second Ihram & the rites of Hajj will be performed.

After performing your Umrah on arrival, pilgrim will wait for the 8th of Zil-Hajj to start the rites of Hajj. 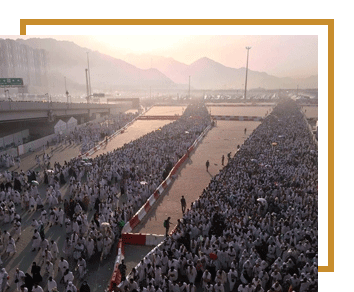 The 8th day of DHU’L HIJJAH, rites to be performed, 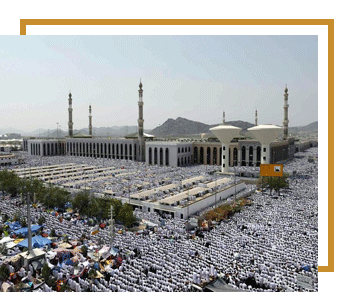 The 9th day of DHU’L HIJJAH, rites to be performed,

Hajj will not be complete without the stay in Arafat in accordance to Sunnah of the Prophet(صَلَّى اللّٰهُ عَلَيْهِ وَسَلَّم).

Rites to be performed: 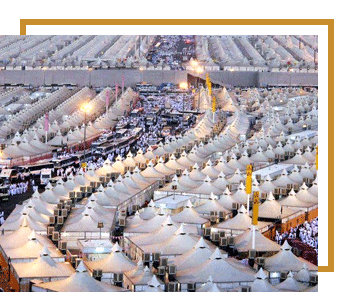 STAYING in MINA: Mina, seven kilometres east of the Makkah, it is where pilgrims sleep overnight on the 8th, 10th,11th, 12th (and some even on the 13th) of Dhul Hijjah. It is the place where the three Jamarat are located, the three stone pillars, which are pelted by pilgrims as part of the rituals of Hajj.

Day of Arafat: The ninth day of Dhul-Hijjah is the Day of 'Arafah, since it is on this Day the pilgrims gather at the mountain plain of 'Arafah, praying and supplicating to ALLAH. Pilgrims perform Zuhur and Asr Salah in Arafat.

The day of Arafah is also significant because this amazing ayah was revealed on this day:

"This day I have perfected for you your religion and completed My favor upon you and have approved for you Islam as religion." (Surah al Maa'idah 5:3)

Night at Muzadaliffah: Muzdalifah is also called ‘Jam’ as it is a place where people gather, during hajj pilgrims arrive after sunset from Arafat on the 9th Dhul Hijjah (second day of Hajj). Although pebbles for pelting the three Jamarat may be collected from anywhere, they are best collected from Muzdalifah (Sunnah). Pilgrims perform Magrib & Isha Salah together and leave this place after offering Fajar Salah next day (10th of Dhull Hijjah).

Muzdalifah stretches from the Valley of Muhassar to the mountains of Ma’zamayn. It is four km long and covers an area of 12.25 square km.

Pilgrims stones these pillars continuous three days from 10th till 12th Dhull hijjah (Rami). The three jamarat are located within a few hundred feet of one another in a line and are named as follows:

Jamrat al Wusta: the second stone pillar in the line.

Jamrat al Aqaba: the third stone pillar in the line.

Rami al-Jamarat: Rami al-Jamarat (Arabic: رمي الجمرات; meaning “stoning of the Jamarat”), sometimes referred to as the “Stoning of the Devil” is a rite carried out by Hajj pilgrims whereby small pebbles are thrown at three stone structures in Mina. The act of throwing stones at the Jamarat is known as “Rami”.

The ritual of Rami is a symbolic reenactment of the actions of Ibrahim (عليه السلام) when he was faced with the trial of having to sacrifice his son, Ismail عليه السلام (other narrations mention it was Ishaq (عليه السلام)). In a dream, Ibrahim was commanded to perform the sacrifice to which he responded with unwavering reliance and trust in the will of Allah.

Each time, Ibrahim resisted temptation, remaining steadfast in his intention to do as he was commanded. As Ibrahim (عليه السلام) was preparing to sacrifice his son, he was spared from having to carry out the command at the last moment and was provided with a sacrificial animal as a substitute.

Ayyam al-Tashreeq: On Ayyam al-Tashreeq, pelting can be performed after Zawwal (midday) and before Fajr. However, there are various times of the day where pelting is more virtuous than other times. These times are as follows:

* It will not be disliked (Makruh) for a man who is a Mahram to perform Rami with a woman who is pelting at that time.

Tawaf Al-Ifadah: It is performed on the 10th day of Zil-Hajj after taking off the Ihram into everyday clothes. After performing this Tawaf, return to Mina.

Tawaf al Ifadah is performed by pilgrim after one frees from doing different rituals of hajj such as slaughtering the animal (QURBANI) and after shaving the hairs of head (Halq).

Tawaf al Ifadah is obligatory part amongst the rituals of hajj which symbolizes being in a hurry to respond to ALLAH and show love for Him. Tawaf Ifadah is performed same as you perform tawaf of arrival during the hajj. However, the only difference is you are not bound to wear during Tawaf Ifadah of hajj at right shoulder nor you are to perform ramal in this Tawaf.

Then the pilgrim must perform Sai between Safa & Marwa, after both the Tawaf Ifadah and the Sai, everything becomes lawful on pilgrim as before the hajj.

Qurbani: The animal offering is one of the integral rites of Hajj.

The animal offerings are among the rites decreed for you by God. In them there are benefits for you. 22:36

The Quran makes the point clear that this is not to be confused with the pagan concept of animal sacrifice for the gods, by stating that ALLAH is in no need of any sacrifice. This is emphasized by the words "benefits for you". This is also asserted in the following verse:

Neither their meat nor their blood reaches God. What reaches Him is your reverence. 22:37 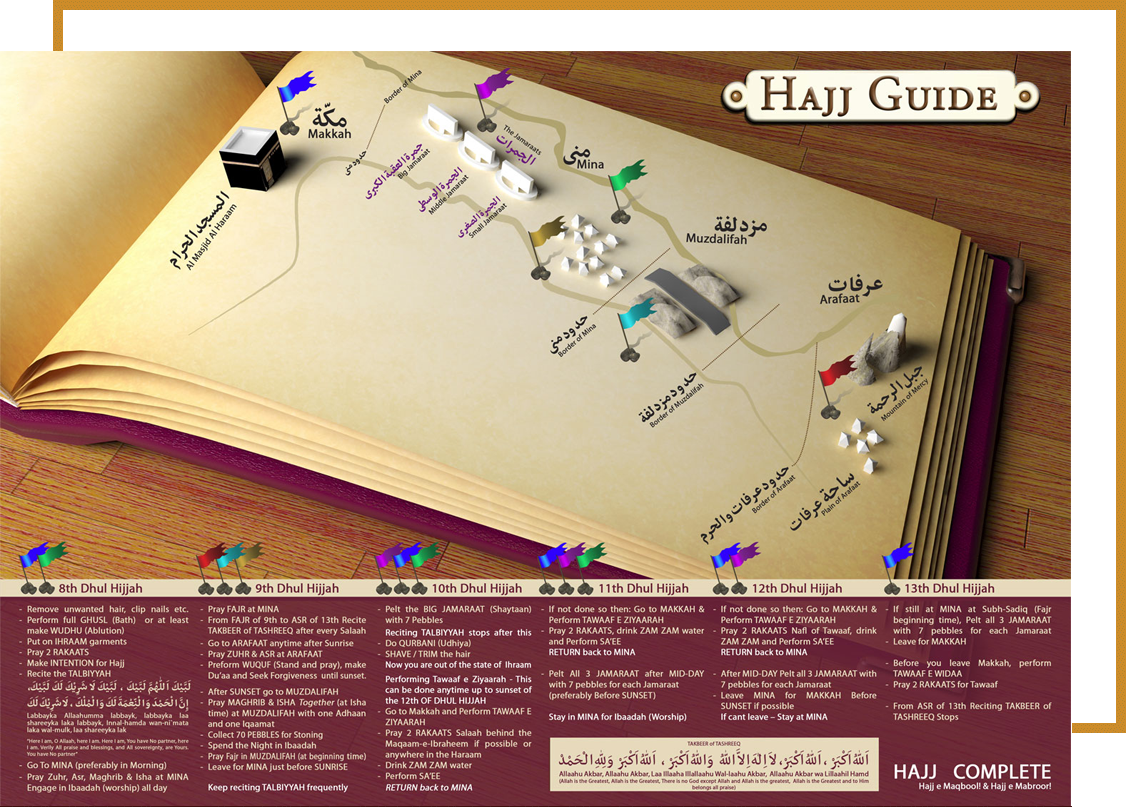